In its more than 25 years of history, KNX has an unrivaled track record of guaranteeing long-term support of automation solutions in any type of building.
Based on the KNX standard, building automation can be realized in a reliable, interoperable and extendable way: devices from over 400 manufacturers work together in a very stable distributed environment without a single point of failure. The current ecosystem is physically easy to install and logically configurable with one single tool, ETS™.

IoT is not an easy solution with cross-vendor support yet

Complexity has increased, reliability and interoperability are however still not guaranteed

There are numerous good solutions from KNX manufactures to connect KNX to higher-level IoT systems already today. The internet side of these products is however not standardized or is created to match specific use cases.

As announced in 2016, as a first step towards standardizing the internet side of such KNX IoT gateways, KNX Association published the KNX web services specifications to allow aligning gateways to the existing web services protocols oBIX, OPC/UA, and BACnet web services.

Adding advantages from KNX to loT

As a second step in the KNX IoT project, KNX now wishes to make the key KNX advantages of interoperability, reliability, and extendibility also available on the IoT level. To demonstrate the goals, a demonstrator was created with Qt technology.

Qt KNX implements the client side of a connection between a client and a KNXnet/IP server. This connection enables sending messages to the KNX bus and controlling the functionalities of the KNX devices. The Qt KNX module is currently available as a Technology Preview as part of Qt for Automation add-ons. More details on the Qt KNX module can be found here: https://resources.qt.io/qt-knx/. Documentation: http://doc.qt.io/QtKNX/qtknx-overview.html/

For the new KNX IoT solution, it is crucial that all device types can seamlessly tap into the communication. The demonstrator includes a representation of all possible involved device types. The goal is to explain the advantages of each type towards the overall solution. 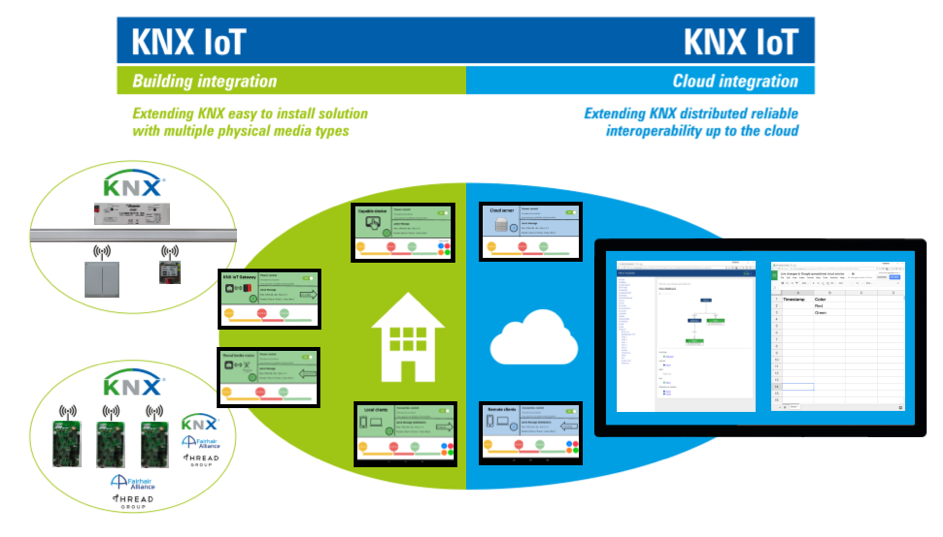 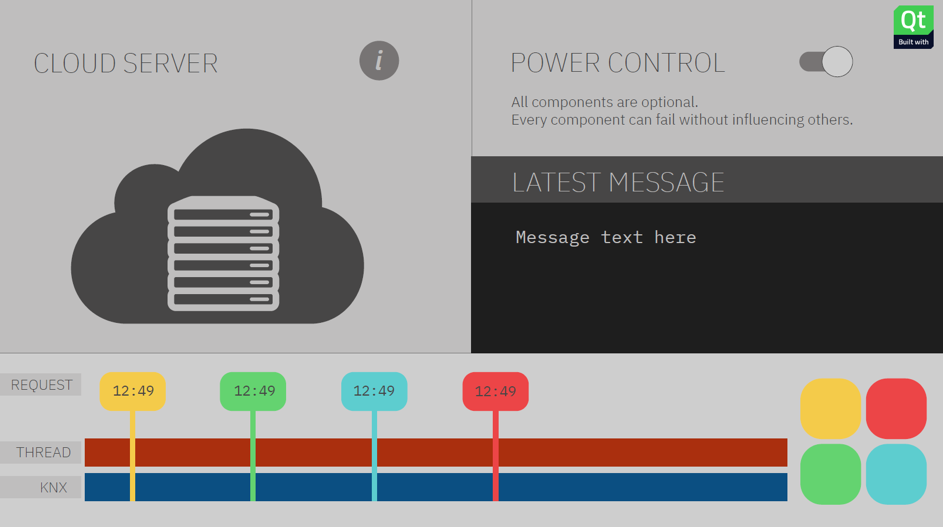 The demonstrated devices include:

The setup underlines the key points of the KNX IoT solution:

The Qt framework was chosen to easily create this setup for several reasons:

The KNX IoT solution will lower the barrier to access KNX as part of the Internet of Things. The aim is to reduce the knowledge required and open the current KNX ecosystem to non-KNX IT specialists through ‘out-of-the-box’ operation, while still allowing advanced configuration and adaption by specialists.

The KNX IoT solution is defined in partnership with key KNX manufacturers and standardization bodies (like Fairhair and the Thread group). KNX is also working on proofs of concept to validate the solutions. Qt makes it possible to concentrate on the key points and keep the code clear from system-specific implementations in these proofs of concepts.

Leveraging standards ensures that the value of KNX products is increased and long-term support can be guaranteed in a constantly changing IoT world. KNX has the advantage of a large KNX install base, which allows drawing on a wealth of experience that will help successfully extending the KNX integration into the Internet of Things.

More details on the KNX IoT project can be found here: https://www.knx.org/knx-en/Landing-Pages/KNX-IoT/

“The Qt Company is exhibiting at Light+Building 2018 at Hall 8.0 F98 as part of the KNX member booth and our experts will be on hand to discuss building cost and time efficient building automation applications. “