Choosing a framework for your next cross-platform app is an important decision. In this post we’ll cover multiple factors to consider when choosing your app development framework and how that should support your business strategy.

Determine the reasons why you may need a cross-platform mobile app:

If you answer yes to just a couple of these questions, you should be considering a cross-platform mobile app strategy.

Let’s dive into the question, what your cross-platform framework should provide:

Successful apps all have one thing in common: a great user experience and smooth animations that give the user a sense of joy.

So to create a modern mobile app, the user interface and the screen transitions need to be animated. Adding animations and prototyping different UIs should be the core strength of your framework. Take Qt Quick (aka QML) as an example – QML was essentially designed and written with this goal in mind.

If you’ve developed native apps for Android or iOS before, you’ll know that getting these animations right is a major time sink. Using a declarative design approach will save you time and money.  QML allows you to easily animate any user interface element with dozens of different easing types and gives your app that extra level of polish

Another benefit of QML is its declarative structure: You can define UIs and animations in less than 20 lines of code and they’ll still be easy to understand and read. With advanced features, such as property bindings, you can save even more lines of code. This requires a lot of boilerplate code in other programming languages.

The basis of QML is C++ which has much better performance than any JavaScript-based framework. In addition, the rendering of QML is handled from a modern scene graph optimized for mobile. Thanks to this scene graph and C++ basis, the animations and loading times are on a native level, just like a regular iOS or Android app.

Compatibility with Your Existing Business Logic

If you have existing business logic in C++, you can include that code and reuse it for your mobile apps. You don’t need to start from scratch and can focus on providing a great UI to users.

If a native feature you need is not covered by Qt yet, you can add it on your own and then provide it to QML with a clean scripting API, from native Java or Objective-C/Swift code to QML. This also allows you to add 3rd party SDKs, which might only be available for iOS or Android. Some of the most popular mobile services are available in a cross-platform format as V-Play Plugins – see the upcoming part 2 for more details. 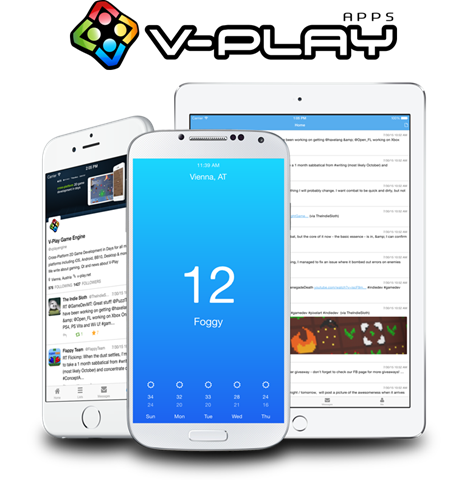 V-Play Apps components were designed with mobile-first in mind. This means you get components used by the most successful and popular mobile apps on iOS and Android as cross-platform components.

This is the first part of the “Mobile App Development with Qt” series. In the second part, you will learn about the differences between platforms and how you can support these differences with a shared code base using Qt and V-Play Apps.

As soon the second part is released, the link will be added here.